Double The Fun of the OC1

Video: Please scroll down to see video of Gemini / Article by: Naim Ferguson

Kai, Kea, Lea and Kaiakea on the way

Kai Bartlett is a pro paddler, wait is there such a thing? Well, if there ever was a pro, Kai would fit the bill. From coaching and leading Team Primo to countless victories, to numerous Kaiwi Solo Championships, designing canoes, and simply being an advocate of outrigger canoe paddling, Kai is living the paddlers dream. Talking to Kai you can sense his unwavering commitment to the sport. His intense training, time invested perfecting his craft, is second to none. But what matters more than anything is his family, and living the way of life that the ocean provides.

The Journey To Here

“Paddling is more than a sport, it’s a way of life, everything from training with the club to fishing trips with the Ohana”

Kai’s mantra.. it resonates in the na’au. Another big focus of his life right now is his growing family. His daughter, Lea, started her first year at the Hawaiian Canoe Club Kamali’i program, around the same time that Kai’s son was born. At 20″, 8lbs 3oz, with hands that are ready to grip a canoe paddle, Kaiakea made his arrival. Talking to Kaiakea’s mom, Kealani Bartlett, she tells me the significance of his name, which has roots in Molokai and the Kimball family. While the meaning for ‘kai’ is well known, ‘akea’ is less known but is commonly used as a joining word in the Hawaiian language, ‘Olelo Hawai’i. With multiple interpretations based on usage. Kaiakea can be interpreted as ‘spacious ocean’ or ‘wide ocean’. The fact that Kai and Kea is embedded in the name was a cute coincidence, but also, it brings a story of two paddlers who found each other and became a family.
(note: Kahako should be used in the word Kaiakea, however might not display properly in your browser at this time)

“I dream of getting him out there, once Mom approves, and teach him about the ocean and throw in some fishing excursions into the mix as well.”

Kai is in a new phase of his life. It reminds me of what uncle Kimokeo Kapahulehua once said “one day you will find totality, and you need this experience to get there” I had a difficult choice ahead and needed this perspective to get through. Seems to me that Kai has also had his share of life’s journey, totality and clear perspective is where we find him now. Flowing is the vast clear space of the ocean of life, but with a mission ahead and a family at his side.

Kai and Lea in the Maui To Molokai Race

After years of consideration and planning it was finally time. Time to build a canoe for his family. Time to break out of the OC1 mold and expand into a new craft that brings together his gained knowledge and renewed perspective.

“Their are some nice OC2’s out there, but I wanted to make something that suited specific goals. If I’m going to build something that works for me and Kea.. or Lea and Kaiakea to use, I want something I can also race in with the boys.” You know they say that two are better than one, Mike Giblin and Kai have been working together to build canoes and improve quality, performance and accessibility for worldwide customer base.

In a yearly tradition they compete in the M2M with daughters Lea and Keala on the Tempest OC2. Sharing the sport and enjoying time together, they seem to have twice as much fun as everyone else out there.

“My inspiration behind designing the Gemini is my family. My Wife and Daughter, because we always have fun together on the water and that’s where it starts.”

I asked Kai if there is a performance goal in his latest canoe design, “The main focus behind the Gemini design was to have a universal OC2 that excelled in a variety of conditions, supports the paddlers comfort zones, and has an appealing look and feel.” 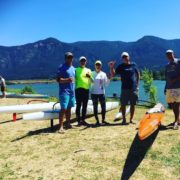 I’m at the The Gorge Race this weekend, the debut of the very first production Gemini. I have no idea how this boat performs yet, but wow, this wa’a looks sweet! Everything I like about the Ares, but twice the capacity. I also notice some of the features from the Tempest. Kai and Mike collaborated on this design, the tooling and interfacing of the canoe, as they do, which brings together all the best they both have to offer.

Kai took his time with the process to make sure the main bullets were nailed down. Even now, the production manager Brian Dalbey is standing by Kai taking notes at the first trial run of the production Gemini OC2 Canoe, everything is considered, Kai’s feedback goes right back to improvements on every feature and detail. The job of improvement, in every aspect of design and production, never stops.

“We did a bunch of tests in every condition and with a variety of paddlers. Our goal; to get a well rounded plate of data points and feedback. We made some changes all along the way as we learned what worked and what needed improvement. We wanted to see what could happen if we pinched here and added there. We really like what we accomplished and I am confident that the design was done correctly and our goals reached. She really is a great canoe.”

I’m watching from the shore as Kai Bartlett and Will Reichenstein take her out for a spin. The splash off the nose has that telltale sign of smooth efficiency. The ama sits perfectly and with ease. The sharp entry of the bow slices clean. The volume in the back holds the nose just right when the front waterline drops.

“It’s like riding the Ares” says Will “The cockpit is exactly the same and just as comfortable.” I notice the seats are inset in the cockpit, a small feature that makes a big difference for us paddlers who like to have that hip control. “You feel snug in the seat and in the big stuff you don’t feel like you’re going to get bucked out of the canoe” Will says with confidence.

I asked Will about technique, waterline, and if a different paddle size would be necessary “Not at all, I felt like I was in my Ares, this is going to change things for people who have been on the fence about OC2.”

The Gemini: How It Compares

There has not been a new OC2 shape on the market in some years, and while some people have discovered the joy of OC2, it hasn’t really taken off like OC1. I am curious how the new Gemini compares to what’s already out there, so I ping Kai “All the current designs are good in performance but seemed to miss something in comfort. This gave me an easy starting point when designing our cockpits and seating positions. If it’s one thing I’ve pushed in my canoes it’s comfort. We ended up taking two Ares cockpits and dropping them in the Gemini Prototype. We added ample spacing between seat 1 and 2 as it’s important to the waterline and interaction between paddlers that they are not crowded out by each other, or the ama and iako. Later on we made additional tweaks, for example, we dropped the back footwells a touch to accommodate seat 2 and help them to feel more connected with the hull. We also widened the width of the seat compartment in both cockpits by 1/2 inch. We want to give the back paddler the feeling of being locked in to the canoe in-spite of sitting behind the ama and having nothing to grab onto if getting jolted around by the ocean.”

I’m feeling sold on the design philosophy, based on everything Kai is telling me and from what I can observe, but I’m a sucker for details so I dig deeper. For the canoe geeks out there, here is what comes with the Gemini out of the box (see feature list). The number one thing to know (in my book) is this; the Gemini is the very first single piece OC2 ever built. Constructed in the same method as ozone’s high performance OC1, a technique called “Monocoque Construction”. Which is 100% Carbon Pre-preg, Autoclave cured in high heat and 3x atmospheric pressure. The result is a stiffer hull that is also lighter and stronger. Thus Ozone’s tagline #LighterStrongerFaster.

So who should consider the Gemini as an option when shopping for an OC2? Is it better for downwind paddlers or flatwater?” I ask Kai.

“We didn’t make it strictly for surfing or flat water, we made the design capable of succeeding in all conditions. We were thinking of customers in Philadelphia and the Puget Sound, as well as the variety of conditions you find in California, Australia, Brazil and New Zealand. I designed it here in Maui, so you bet it works in our Hawai’i waters. Look, with this design we wanted to accommodate every one of our different communities and we put time and attention considering each location based on our experience.”

It’s not everyday that a new design is born, so we congratulate Kai and the entire team of people that worked to bring this canoe to life. Ozone distributors will have demonstrations and Gemini’s in inventory over the next few months. I highly recommend joining the Gemini List if you are interested in this canoe, to receive news and updates. Until you get a chance to try the Gemini yourself, take a look at some drone footage (below) I took while down at the Gorge Downwind Championship. I couldn’t get too close as kites and sails were zipping by, so I will update the video once the Gemini arrives in Hawaii (August).

I am also collecting reviews from paddlers who had the chance to try the Gemini and will post them on the product page.

Mahalo for reading and happy paddling!

Tempest OC2: The Importance Of Comfort

Interview with Mike Giblin of Ozone
Scroll to top