HOW WE GOT STARTED

One day last year whilst Mark and I were sitting on the beach shooting the bull after paddling around the island at Lake Havasu I mentioned that it was my opinion that no one has paddled an OC1 the length of the Colorado River – including the four lakes formed behind Glen Canyon, Bolder, Davis and Parker Dams. We had already paddled the length of Lake Havasu and figured Lake Powell at a length of about 150 miles would be a kick in the head to paddle. Soon thereafter, Steve joined us on our quest. We welcomed him as an experienced paddler. Besides, he paddled a Hurricane and offered to assist me in becoming a better paddler in mine.

We spent a few weeks planning how to carry just enough gear on an OC1 to make the evenings as comfortable and safe as possible. Each canoe carried fifteen pounds of gear (no beer – we had to mooch that from an occasional house boat that we waved down after nearing our destination).  We spent three days paddling and exploring before landing at Halls Crossing where we consumed a quantity of beer whilst bragging about our accomplishment. We plan on finishing off Lake Powell in 2015 with a 100 mile paddle to the vicinity of Glen Canyon Dam.

Mark and I have been paddling SUP’s, OC6’s and OC1’s for several years. I am currently the VP for the Lake Havasu City Outrigger Canoe Club. Steve is an accomplished OC6 and OC1 paddler and coach. We all have a history of watersports involvement including surfing, waterskiing, and riding the Air Chair and Sky Ski. We love paddling though – why do we love it?….It’s the people man! It’s the water, the ocean! It’s paddling along, experiencing the natural world around you – sun, sky, wind, waves, birds, trees swaying in the wind, a mountain sheep standing on a rocky cliff, a mountain lion getting a drink of water as you quietly paddle past. Hay!

THE STORY OF OUR ADVENTURE

On August 18, 2014, after paddling our OC1’s 6-1/2 hours (28 miles) on the northern reaches of Lake Powell located in Utah, we finally found a spot amongst the sandstone cliffs suitable for setting up camp. Unfortunately, our only camp option was located on an exposed point jutting into the lake. Soon after putting ashore and starting to set up camp, we observed a wind gust approaching us that was actually driving the surface of the lake towards us. The gust was so fierce that it pushed our beached canoes along the sand like sleds. Our one-man tents turned into flying wings. Only by laying our bodies across the top of them were we able to keep them from sailing away in the wind. Then the rain came. Then the lightning came. It was going to be a long night… Our greatest fear was lightning striking our exposed position. Our luck held through the night with the strikes keeping to the bluffs above our position. 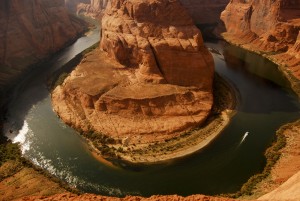 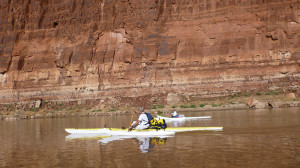 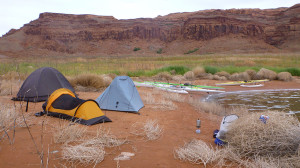 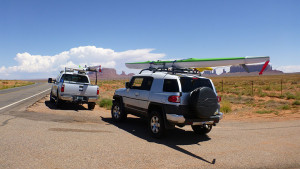 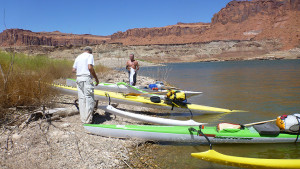 The next morning found us paddling our OC1’s next to 1000 foot high sandstone cliffs, through winding canyons and across wide expanses of wind-blown water. The only sounds we heard were the soft whisper of our OC1 hulls gliding through the water, the wind blowing through the reeds and across the red and yellow sandstone cliffs, the occasional splash of a jumping fish, and the call of a variety of birds. After the first night’s storm, the calm morning hours were a welcome relief.  Over the next two days we spent between five and six hours a day on the water and camped at some of the most beautiful spots that one can imagine. At the end of three wonderful days we had paddled 52 miles up the lake.The Powell trip was one leg of a continuing project to paddle the length of the Colorado River – excluding portions of the river that are not accessible to an OC1 – from the confluence of the Dirty Devil and Colorado River, above Lake Powell, to as near to the Arizona/Mexican border as possible. As of this writing we have paddled approximately 145 river/lake miles and plan on completing Lake Powell in 2015.

THE CREW, GEAR, AND SUPPLIES

Our canoes include two Hurricanes’ and a Huki.  Essential supplies carried behind our OC1 seats include multiple-day beach camping provisions, including water purification units, canoe repair materials and emergency first aid kits (between 15-20 pounds aboard each canoe).

Steve Benson, Mark Geraghty and I (Gary Mortimer) live in Lake Havasu City, Arizona, and enjoy paddling OC1’s on the Pacific Ocean. But, due to our inland home locations, have expanded our list of OC1 paddling destinations to include the beautiful and sometimes remote Colorado River and its chain of lakes. This project has brought us great deal of personal satisfaction. While out on the river we have learned to trust each other, anticipate problems, and plan for them before they occur. Most of all, we have fun! By the way, all three of us are Golden Master paddlers… Paddle hard and see you on the river!

Adventure, to be continued…

Do you have a canoe story to share? Shoot us an email at web(at)outriggerzone.com

Oahu’s Kanaka Ikaika: Stronger Than Ever

Jimmy Austin: Always Longing for Another Session
Scroll to top