Shortly after EDT Va’a paddlers succeeded in making themselves known at the Moloka’i Hoe, the most prestigious race of the world, we managed to interview Rete Ebb, the EDT ‘peperu’, steersmen of the team. The Molokai Hoe victory was achieved during the final minutes of the five-hour long race making it a spectacular finish. It ended Shell Va’a’s 8 year winning streak, which is a feat unequaled in the history of the sport, Shell Va’a finished in 2nd place, 16 seconds behind EDT.

Rete Ebb, whose nickname is ‘Le Crabe’ (The Crab), is a true grand champion. In 2013, he pulled off a historic double victory in V1, winning the Aito and Super Aito. During the 2014 Aito however, he huli’d (flipped) and yet managed to hold on to second place, but at the Super Aito 2014 he proved that he is the uncontested champion and won the race triumphantly.

Winner of Hawaiki Nui Va’a in 2012, the most difficult race in the world, however EDT Va’a fell short in the 2013 event and lost to Paddling Connection. Since they were absent on the podium in 2013, Shell Va’a saw this as a chance to regain their dominance and return the spotlight back to their impeccable record of accomplishments. Additionally Team OPT is also marching forward and returning with strength and potential, with a brand new team of young paddlers. Hawaiki Nui Va’a 2014 will go down as an exciting event with so many potential champions and contestants who all wish to prove they are the best and fastest canoe team on the planet.

Editors note: This interview was conducted prior to 2014 Hawaiki Nui Va’a, which did in fact deliver as a world class event with fascinating battles witnessed by a world audience on live streaming video and GPS tracking. Resulting in a triumphant EDT Va’a who secured their first place finish by a margin of 43 seconds.

We caught up to Rete Ebb, right before his training, to talk story:

Please Rete, tell us who you are. What is your story?

“My name is Rete Ebb. I was born in Papeete May 30th, 1991, I am 23 years old. I live on the island of Tahiti in the Mataiea community. My mother is from Mataiea, and my father is from Papenoo. My grandfather comes from Raiatea.”

How did you start paddling?

“Growing up we would paddle together as a family, all of us, including my cousins. My father was the president and trainer for Mataiea Va’a, and that is how it all started. I saw all of my dad’s friends paddling, and my friends also, so I said that I should take it up as well.

You like to try everything on the water, don’t you? Surfing, Stand Up Paddling, etc.?

“SUP only started about 2-3 years ago, and several cousins in the area also practice it, so I also participate when I can. I also do a bit of surfing but with the va’a practice schedule we do not have much time left. We have group practice on V6 and also V1 training, so there isn’t much spare time in our schedule!”

When did you join EDT Va’a?

“In 2011, as soon as I became a senior. Shell had also contacted me, but I preferred EDT. Together with my professional electrician degree, it is a perfect match, I have it made!”

How do you manage your time as an electrician with EDT and an athlete with EDT Va’a?

“It’s fine, I manage it well. Of course, there are a lot of sacrifices to make, but if you want good results, you have to put in the time. I am an electrical fitter for EDT. We are on the field for 90% of the time and 10% in the office.”

It seems as though there is a good ambiance in the group, can you tell us about the EDT team culture?

“We are buddies and get along great. When we were junior cadets we were all good friends and would get along even thou we paddled for different teams. Once we became seniors, we all ended up in the same club at EDT and now we are no longer “enemies” or rivals but became loyal friends.”

I have heard that Hervé Dubost Martin, the CEO of EDT, went to Molokai with you, how was that?

“And that is a good thing, it made the team more motivated because we know he is there and that he is right behind us. It is the CEO’s objective to win Molokai; that is the race we were missing. On the canoe, there were guys that have never won any race before, but everyone was focused and hungry to win. Not only the CEO, we have the entire company behind us and supporting us, we wanted to make them proud.”

Your coach Jean Paul Urima seems to be doing a good job. Does he give you a lot of instruction while you are racing or does he leave it up to you as the steersman?

“I have a lot of respect for our coach, since he has won all of the V6 races over his career, even if it wasn’t always with EDT. Therefore, he has a lot of experience. Having a coach like that is great since you know that he has a wealth of knowledge and has a lot to teach us. He speaks up only when things aren’t going well, and then he scolds us. But, when he sees that the canoe is moving just fine, he doesn’t say anything. He trusts that we are doing the right thing.”

Tell us about your choice to run the coast towards the finish at the Molokai Hoe. How was this decision made?

“That choice was not determined ahead of time – it was done on pure gut instinct during the race. We wanted to try something different to make a come back. It was make it or break it, and we made it. The coach told us to get closer to the coast and run the inside line. Then, it was up to me to be careful because of the guys on the canoe doing changes and to be placed properly in the line. We had to be careful not to get too close to the reef and to be taken out by a wave and risk not being able to finish the race.”

This choice paid off. You caught up to Shell towards the end, but how did you manage to pass?

“From Coco Head you can see Diamond Head’s last point. We were completely on the island side. We saw Shell move up with a large gap. We told each other that if we pushed harder, we would come back. Then, we faked a change, so Shell changed. This allowed us to make it up to their length and that is when I felt that we would win since we were moving straight for the buoy, even if it meant that we had to give it everything we had.
Winning like that, especially since they were ahead until about 5-10 minutes before the end, was incredible. We weren’t expecting it at all. We were shocked and happy.”

Is the next goal Hawaiki Nui? You won in 2012; then in 2013 was Paddling Connection. Are you worried about them this year? 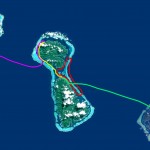 t train much for the change of course, perhaps twice and without an escort boat. At Hawaiki Nui, everyone wants to win and its anyone’s game. We have to watch out for other clubs, but we also have to remain zen. We do not pay attention to the gossip. We try to stay calm before the race and on that day, we get to see who is the strongest. Let the best one win!

Great attitude and spirit Rete. Thank you! Anyone you would like to thank?

“A great big mauruuru to the paddlers, the EDT staff, to the CEO and the entire company, who are always behind us. At work, they are always there to encourage us, without forgetting about our families and the Mataiea friends.”

Editors Note: EDT Va’a did continue on to win the 2014 Hawaiki Nui Va’a in definitive fashion proving they are the best team in the world. Congratulation Rete and EDT.

This article was originally published by Tahiti Infos. Translated and republished to English in joint partnership with Tahiti Infos and Outrigger Zone.

Translated and Edited by Naim Ferguson and Annie Carlo