I was curious and in the dark. I never had the opportunity to paddle in an Unlimited canoe. There was so much excitement, videos on the internet, new canoe races on the circuit Eono & Olamau and on and on. Amazing looking canoes coming from builders in Oahu, Big Island, California and Australia. But what did it feel like? How did it run? What was it like to catch a bump? Easier? Faster? You never know until you try, and I needed to get in one of these rocket ships to see for myself.

First hand experience is the only way to know if something really checks out.

I was in Oahu for a visit and I reached out to Jimmy Austin at Puakea Hawaii and Mike Giblin at Ozone to see about getting in one of these new canoes with some friends. We’re not elite paddlers, not a ton of bragging rights or accolades, we just love to paddle and enjoy paddling together.

Mike connected us with Jimmy who went out of his way to get us in a canoe, the Malolo. We launched from magic Island on a flat smooth day. We experimented, did some pieces and even got into some wind. Here are my notes from the experience. 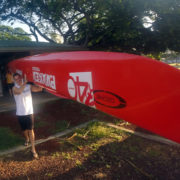 At 145lbs the Malolo is considerably lighter than a spec canoe (400lbs). Lifting and carrying was comfortable and made for an easy transition from Hale Wa’a to the ocean. The seats even have built-in ergonomic handles for a nice solid grip. 2 people on the hull, 1 on the ama, not a problem, althou a good idea to have more just in case someone steps on kiawe or something unexpected. 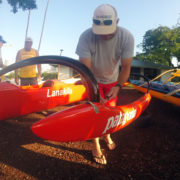 Rigging was noticeably a different process, much more like an OC1 than an OC6. None of us had rigged the Malolo before so there was some mystery about which side to start with. We decided to rig it like we would a one man (oc1); hull side first, front iako then back. I noticed the hull side slips right in and snug, but we did have to tap the iako in the back to get it to go in. Once we lifted the back of the wa’a the tension released and we could slide it in with ease. Using a wrench we tightened the back and front to secure the iako to the Ama, while a pipe fitting clamp held the hull side in. 5 minutes in and we we’re done and carrying the canoe to the water.

The first thing that really struck me about this canoe was the rigidity of the hull, stiff like nothing else. Strong like a tank but super light with impressive details. You get his feeling like it could handle anything the ocean or crew could throw at it, but I’m wired to be on the safe side and always respect the Wa’a. 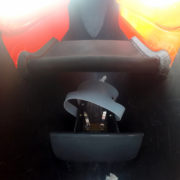 Seats are ergonomic and have a brace for carrying the canoe

I felt like I had just climbed into a Ferrari. The rails were just right, the cockpit had plenty of space, the side walls were smooth, the lines were sexy and the boat was ready to move. Foot braces could be adjusted, with different heights in our crew we could all get a snug fit. The added leverage provided by the foot brace is a game changer in itself.

I sat Stroker, which was cool as I could set the stroke rate and put my attention to the wa’a. Three strokes in and I knew something was different. Yup, it’s not just hype. My sense of feeling the water was heightened by 10x. You know when you’re on the plane and your ears pop? Suddenly you can hear the cabin noise so clearly. It was like spider sense, I could feel the power zone like I have never felt before. Not just mine, but the paddlers behind me. You know when that veteran paddler up front looks back and says “you’re off”, he/she can feel when your plant, drive and recovery are not in sync. In this canoe, we all had that ability to feel this nuance, as it was pronounced. 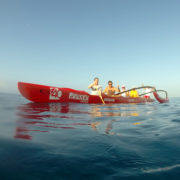 After a couple changes I could tell that just because it was an Unlimited Canoe, it didn’t mean we are suddenly a faster crew. New rules also means new understanding. “Pay attention” I thought to myself. I watched the nose with every push, tweaked and adjusted my stroke. I was reminded of riding a young strong horse for the first time. It’s touchy, moody. It needs a firm hand with a soft touch. The hull would lift up out of the water with each stroke and then set back in on recovery. We needed to find the right stride to get her to respond and make the most of each push.

The Ama was a non-issue. Not what I was expecting when I heard it was so light. It rode smoothly and quietly, not feeling too ‘light and tippy’, but also not digging in or effecting the line. I had only seen photos of steersmen on the left side of these boats, making me think they were possibly unstable. Not the case.

I’m a nerd when it comes to technique, I love to sit at a party with paddlers and just talk about this, hearing all the different perspectives. I also try to break things down into building blocks, so that me and my crew can have a baseline of understanding through the unspoken, the feel. For example slow deep strokes vs quick and fast, what it feels like and how the canoe responds to it and at what cost to the crew.

In the Malolo OC6 we tried different styles, from the Hawaiian Stroke to the Tahitian Stroke. We practiced changing gears, slow recovery and quick recovery. I can’t say from this one experience which stroke style this canoe likes best, but for my crew that day, it was a variable rate that won the day. Loading the front, leaning in and quickly recovering. Using different stroke rates depending on hull speed. 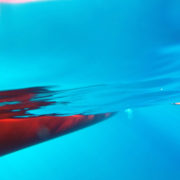 We stopped and played with the tipping point of the ama. To see how high can we get the ama before it wants to come over. There are a couple things to point out, one is that its not particularly tippy when paddling, but be warned, when it flips, it happens fast. We lifted the ama a bit to see for ourselves and were upside down before we knew what happened. I think this is something that you and your crew will need to calibrate for yourselves. It feels different than a spec and your response will need to be different.

We paddled in mostly flat water, then headed up to Diamond Head where we did find some bumps and about 12mph of wind. We turned down and got to work trying things out. Pushing hard into bumps as we are used to in Spec OC6, we were flying right off the bat. Hoot’n and hollering as we do, the splash guard was shooting water in the air non stop. After a mile or so we were all breathing hard and getting tired, maxing our lactic threshold. “Lawa, stop!” someone said, we regrouped. This boat is supposed to be easier, why are we working so hard? 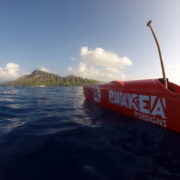 We decided to try a different method and this time slowly build speed. From one bump to the next we kept our heart rates down while incrementally getting faster. We figured we only needed 3-4 power strokes to get in a bump, so we would maintain speed and then pick off bumps when they came. Our overall speed got faster and the canoe seemed to hum, like there was an engine in the back just keeping us going. We could go on without reaching LT. Selecting our lines and choosing when to collectively apply effort and when to cruise.

I moved to 6 to see if I could steer this beauty. OMG was that a good call. Fun as hell! Steering the Malolo reminds me of paddling a V1. Taking strokes not pokes, to correct AND move forward. The nose holds on to the bump in front of the one you’re on, so it almost doesn’t require much steering (at least at the size that day). Which meant I could help the effort to push into the next one as the shoulder cleared. More reward for the effort given as well as more strategy involved. I’m beginning the think that Unlimited OC6 is not just about getting faster, it’s about getting better.

My paddling IQ went up on this day. No matter how little I know about paddling, I know a bit more now. My biggest takeaway from this experience has to be the awareness to stroke, wa’a and water that the unlimited canoe brings, not just in plant, drive, exit, but speed, pressure and noticing the crews harmony ..or lack of it.

When you add it up, the construction, lightness and responsiveness; what you have is this clear feedback signal from the wa’a, indicating with more clarity what is going on, what is working, what is not working and hinting at prospective ways to improve speed or efficiency. Unlimited OC6 made me and my crew more in-sync and aware. All of this new found insight can be translated right back into Spec OC6, it is not exclusive to unlimited. What you learn in the Unlimited OC6 can be applied to Spec OC6.

Words are cheap. You must experience.

Learn More About The Malolo 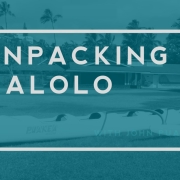 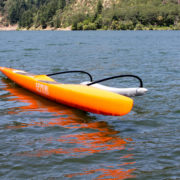 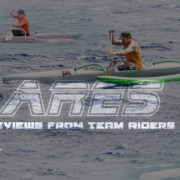 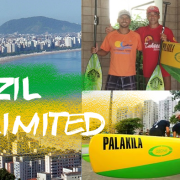 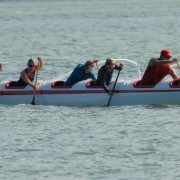 Into the Vortex – a first hand review of the Unlimited OC6 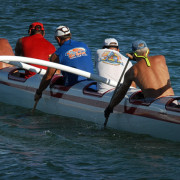 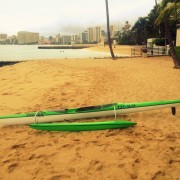