Thanks to StandUpPaddleSurf.Net for recording this discussion with Johnny Puakea regarding the Kahe Kai OC1 (Outrigger Canoe).

Learn More About The Kahe Kai

Interviewer: Okay we’re here with John Puakea, the creator and inventor of the Pueo, the Kaimana, the Kainalu, Ehukai and now the Kahe Kai. So tell us, what’s the difference between the Kahe Kai and the Ehukai and let’s say the Pueo?

John: The Ehukai has a real Ferrari feel, its a zippy boat, picks up speed, turns quick, jumps over bumps really well. We had some feedback from bigger guys who were having a little trouble with the boat because the nose would dip. It was a big learning curve on the boat (Ehukai), so we decided to come up with a design that gave it a little more ease in the surf, especially for bigger paddlers. The whole theory behind it, was to catch the boat sooner and carry it longer and it be drier in the surf.

Interviewer: So compared to the Ehukai, this would be better for a bigger person?

John: It would be, we just had Rylon on it and he’s 145 pounds and he loved it. So I’m thinking we’re not out of the range of people, you know 140/145 but it was designed for stronger men or really strong women.

Interviewer: So what’s the cut off rate where this would be a better boat then the Ehukai?

John: But right now we have guys in the Ehukai, like Jimmy, he loved that boat for 3 years. Did very well in it. He was 195 but he’s jumped on the Kahe Kai now, he’s like yeah I’m so happy on this.

John: Yes he actually tried it once before the channel and said there was no way he would not change before the channel, its too risky. But then, in the last minute he spent a bit of time on it and said “I’m in. I’m using it on the channel.” And he raced it. So he was pretty confident after trying it.

Interviewer: And then what did he think about it? Because the last channel run was kind of hard (flat), wasn’t it?

John: Yeah in the middle of the race he looked over and he said ‘I love this boat, it moves easier, catches the bump easier, holds him up longer and actually jumps over better than the Ehukai’, which is something the Ehukai did better than most boats out there, was that you could get over or through the bump in front to go ahead of somebody and this one actually has a little bit higher speed on the bump because of the volume and where we put it and then it jumps over the bump easier.

Interviewer: Okay so was the first boat that you ever made the Kaimana then or?

John: First boat I ever made was called the Kaku, it was way back in the day.

John: Exactly and then it was Elua, which was number 2, and then it went Kaimana, Kainalu, Pueo, Ehukai and then Kahekai.

Interviewer: Okay so what was the improvements then that you made, like the things that you said okay, let’s change this?

John: The first 2 boats were real long, was back in the day when things were 22 feet long, boats were sticky in the surf. When the Hurricane (By Mike Giblin) came out that boat changed everything because it was a shorter boat that had speed. So then we all went down to about 20 foot 10 and that’s when I designed the Kaimana and from the Kaimana to the Kainalu were just minimal changes and the reality is the Kainalu became the Pueo and most of it was just changes I made in rocker, seat positioning and above water.

Interviewer: And then from Pueo to Ehukai you wanted to make it slicker?

John: I was looking for something that was a little more zippy I’d say. So we actually went back to the Kaimana. So that was sort of the drawing board and we made changes from that to try to create something, those ideas made the Ehukai and then when we did it on the computer and farred everything we actually ended up with a little narrower nose and tail that I wanted but it turned out good, so we just went with it.

Interviewer: When you’re designing these boats, is it done on a computer?

Interviewer: You mean you go straight from computer to mold?

Interviewer: So you don’t CNC it and then try?

John: So you know there is always a period of a couple months when it’s in build that we’re going, ‘I hope this thing works’.

Interviewer: So how are you knowing that the differences are going to make a change, you don’t test it at all then, you just kind of guess?

John: Kind of yeah, I mean it’s from watching the canoe and understanding certain things about it, you kind of think okay if I do this here, here and here, I widen this, move that, take rocker out, move the rudder, I should get this, this and this.

Interviewer: Can we take a look at the canoe?

Interviewer: So we say okay, let’s look at this canoe right here and you say what is the difference between what you did on this canoe, versus the Ehukai, because to a lay person it might look exactly the same.

John: If you compare the Ehukai, we went an inch wider in the middle of the hole and moved some of the volume forward.

Interviewer: So right about to what? (points at the canoe)

John: So right about from here to about two feet behind the back I’ako. We opened up a quarter inch and that was designed to get a little more flotation, hold the bigger guys a little better and we moved the volume forward, which should give us more speed on the top end. The bow on the Ehukai was dipping in the water, like 3 quarters of an inch taller on the bow, so we keep it drier and avoid pearling.

Interviewer: So it is taller on the bow or?

John: It’s taller now on the Kahekai. We made the seat a quarter inch wider, so you could fit better in it and we dropped it a quarter inch lower for stability, then we took the foot wells, narrow them and drop them all the way to the floor for stability and then these rails here, where the cockpit is we rose. So I brought it higher from here to here to keep water from coming over here.

Interviewer: So this part right here.

Interviewer: Okay and then what’s the idea with this splash guard cover?

John: Well at 8 pounds a gallon, anytime water comes into the foot well, your dragging all that weight until you get the water out of there, so this keeps it light all the time plus it keeps the sun off your feet.

Interviewer: So is here the new seat?

John: So this is Jimmy’s seat, he customizes his, he takes sand paper and he makes it fit his o’kole just right and then on this boat we took tail rocker out of it because theoretically that gives you an easier pick up and more travel on the bump and then we move the rudder up 3 inches.

Interviewer: And then I noticed like you got on this back over here (the tiller cover), it’s just fully in (built in)?

John: Yes, one reason for this is for safety and in Australia they had a rule where you couldn’t have anything open on the back where the rudder is in case you fell off the boat you tried to grab it, it would cut you.

Interviewer: Okay, so is the bottom kind of the same as the Ehukai or change the bottom wider with less rocker?

Interviewer: What about the seat placement? Did you move that at all?

John: That I left. I moved the volume and the bottom instead of moving where you sit. I like the seat forward because it drops you into the bump but if the rest of the boat isn’t made for it, you’ll either pearl or fall of the bump quick.

Interviewer: So what’s the max weight you think on something like this?

John: Well the Ehukai is about 215lbs, so I don’t see why this wouldn’t hold someone at 230lbs.

Interviewer: I remember Mel Pu’u was riding the Pueo before.

John: Mel Pu’u is on the Ehukai right now and he loves it.

Interviewer: How much does he weigh probably?

John: He says 240lbs, I’m going to say it’s 260lbs but he loves the canoe but he’s a very good waterman, very technical, he understands the ocean. So he can handle the boat where he needs it, he’s been asking about this (Kahe Kai) and when he gets in this it’s done.

Interviewer: And Pratt went on it too.

Interviewer: He went on it the other day. He liked it, he says he’s 210lbs.

Interviewer: So what are your thoughts on this boat, you’ve ridden in it twice?

Billy Pratt: Yes, I’ve been on it a couple of times, really the ease to get on a bump, the ease to get it up and going is really desirable, it’s really nice. Certainly at 16 pounds is pretty incredible one to be as stiff as it is, the rudder is moved up a few inches as John probably mentioned. So I’m really excited to try this in a bigger surf to see what it feels like in those circumstances but it seems to be extremely responsive and certainly the way it trims, it really glides nicely.

Interviewer: So we got a chance to see this thing in action, looks good! When is this for sale?

John: Now! It’s on the market, so the first 2 boats that came out were production models straight out of the mold. We have some coming in June in our container and more in August (in Hawaii) and there are already starting to get distributed around the country and other places.

Interviewer: How much is it?

Interviewer: Okay so there is only one Layup option then?

John: No actually we have a Pro Model that we’re just starting, it’s going to be closer to five grand and that is going to be the ultra light 16 pound Kahe Kai, with fancy paint job, heavy duty cover bag that will come with combination of rudders and things like that.

Interviewer: Does this one come with bag and all that?

John: They all come with bags, accessories, all included.

Interviewer: So there is also a cover for the I’ako, bag for the Ama?

John: Bag for every part, mainly because when you put it in your car or something you don’t want to scratch things up.

Interviewer: Okay and then if they want to order it, then how do they order it?

John: Well they can go to our website Puakea designs and ozone is distributing in the rest of the country, East Coast, Australia, New Zealand and Brazil and other places.

Interviewer: How long since the Ehukai came out?

Interviewer: Okay so good time for a refresh?

John: It is, it’s perfect timing.

Interviewer: Okay best of luck with that. 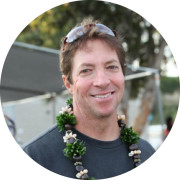