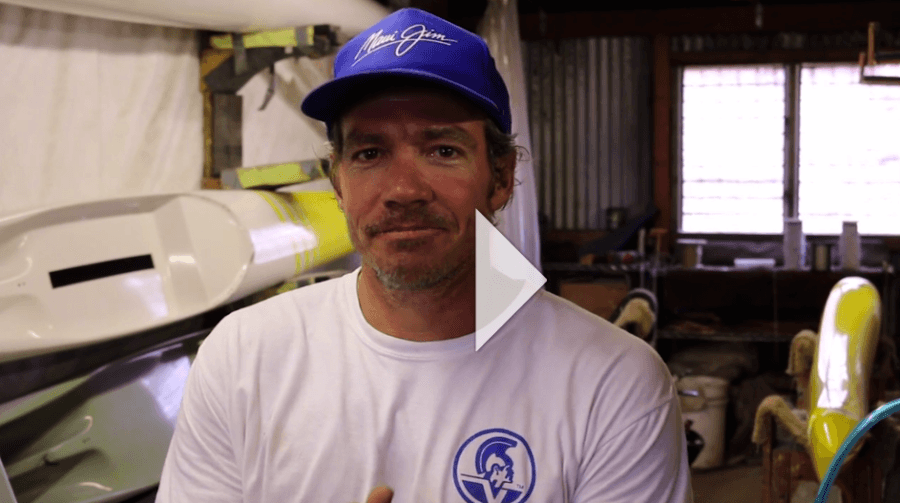 (scroll down to play video)

Sylvain: Hi, I’m Sylvain, I’m from Ozone France and I am here in Maui and I want to talk with Kai Bartlett about the new boat.  The name of this boat is Antares.

Kai: Hi, I’m Kai Bartlett and and we’re hoping to answer some of your questions.

Sylvain: What is the meaning of Antares?

Kai: Antares is the heart of the Scorpios constellation.  We had such a strong belief in how the Scorpius performed in the open ocean and wanted to use that as the core for Antares, because it’s the heart of the Scorpios.  Our objective behind the Antares was, basically, making an overall well-rounded boat.  We’re really happy with the surfing of the Scorpius, but we knew that in other conditions, we could refine the design to excel in those other conditions, upwind, flat water, things of that sort.  The process we used in designing the new Antares was we made several prototypes, we would make one prototype, would test it with the XM and the XS with our team riders and shop guys and go back and forth discussing performance. Jumping from one boat to the next, to the next, back, back and you know, if we didn’t like it, we would bring it in and cut it up again.  We made several prototypes, just because all of the cutting, you gain more weight and we didn’t want it to be over weighed, and each time we would take it out and test it again against our other models.  With the Antares, there are a lot of differences, many really, you know, from nose to tail, it’s very different, the cross-section, the water line, the width of the water line and the steering system.

Sylvain: I’m the lucky guy who got to try the canoe, and I really felt a difference in the sitting position.  Can you tell me what is different in the Antares seating position?

Kai: We wanted to change it again, just to be coming out with something new and fresh, but the idea was just being more above your feet for better leverage, ergonomically positioned so that it’s a little more comfortable so you’re in a natural seating position.  In a lot of our designing we like to emphasize the comfort factor, because once you’re uncomfortable, everything else starts giving way, so that was the idea behind it.

Sylvain: This one comes with a new Kai Wa’a ama, right?

Kai: Yes, it does come with a new ama, basically every since we’ve come out with this new ama, all of our canoes come with it.  What we did with this new ama is went brand new with what we’ve done in the past.  In the past, we were really focusing on an open-ocean ama, and with a lot of our world market having a variable condition spectrum, we wanted to focus on being more well-rounded for all conditions.

Sylvain: Are there many differences between the custom Hawaiian made canoe, compared to the Ozone construction?

Kai: There are slight differences in the design, and it’s all more aesthetic stuff. The ozone footwell has small divider instead of a larger divider, due to the construction technique.  The Ozone made Antares is going to be a one-piece monocoque construction. Using molding and hand shaping (in Maui shop), it’s a lot different in Hawaii as we’re still doing two-piece molding. With the foot wells (in Maui) we can get away with having our ridge and our cables set up in the middle, while the ozone built will have the cables running on the outside. The two piece will probably be slightly heavier in Hawaii then the ozone built one piece (which is also comes standard with 100% carbon).

Sylvain: Kai, can you tell me now if you have changed the way you paddle this canoe, and in what kind of condition you might change it?

Kai: With your body position changed up, you automatically change your stroke a bit from how we were sitting in the XM and the XS, because in XM and XS, your feet are a little closer to your your butt, so it’s a different stroke position. Now, it’s almost as if you’re trying to be smoother, because you’re higher you have a better leverage, I noticed too more upper abs than lower abs.  You feel it just sitting, and the position changes that stroke a little bit.

The Columbia River Gorge: A paddlers paradise
Scroll to top