Paddle For Life: The Story Of Team Patty

Joseph tells the story of a team coming together to Paddle For Life, for Patty Rycroft

I recently moved back to Hawaii after living 15 years in California; I was in San Diego my entire adult life. Within the first twenty-four hours on Hawaiian soil, my sister convinced to try out canoe paddling. I paddled canoe growing up as a steersman so I had some experience. While living on the mainland, I had a short but notable career paddleboarding and surfing. At one point, I put my sup career on hold for a position as an interim digital director at a prominent agency. It was a great opportunity so I took it but eventually moved on, which spurred me to move back to Maui. It was time for this Hawaiian to return to Hawaii.

So back to paddling, I had been training, both with and without my crew usually 6 days a week to get in shape. This years regatta and distance seasons of paddling at Hawaiian Canoe Club were great. Through the course of the season, I felt myself getting stronger every practice. I knew from the start that I wanted to participate in the race from Molokai to Oahu and I knew it would take everything I had to give if I was going to be ready in time. If I made it, I didn’t want to be the weak link in my crew. During the regatta season, my division was very competitive and I only raced in a few races. At least I won every race I participated in. I have a perfect paddling record of 2-0. I’m jesting ;).

Despite only being able to participate a few times, it was an honor to be involved with Hawaiian Canoe Club, which boasts many world-class paddlers. I was able to be mentored by masters and learned so much. I try to apply everything that others tell me. I even had the opportunity to participate in distance races with some of our club’s top paddlers. 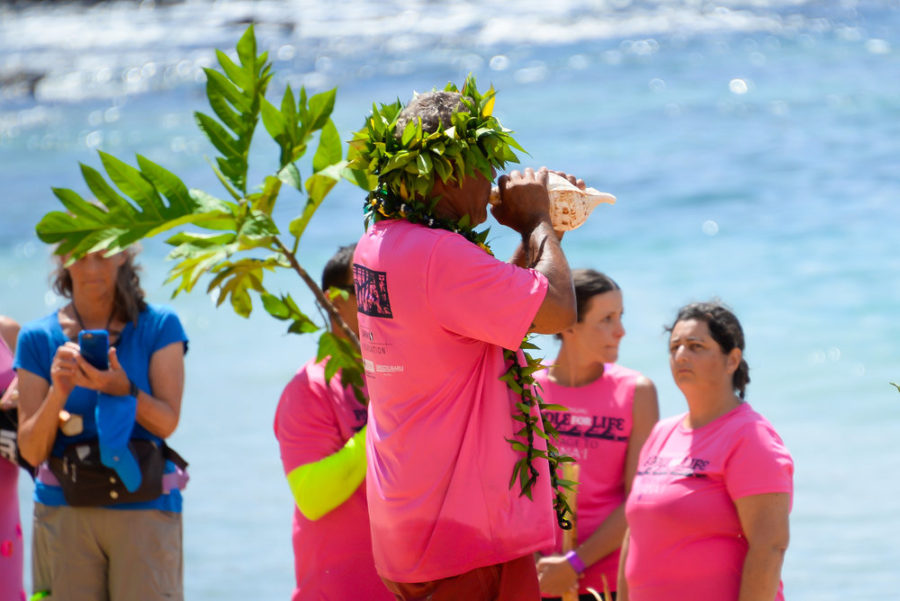 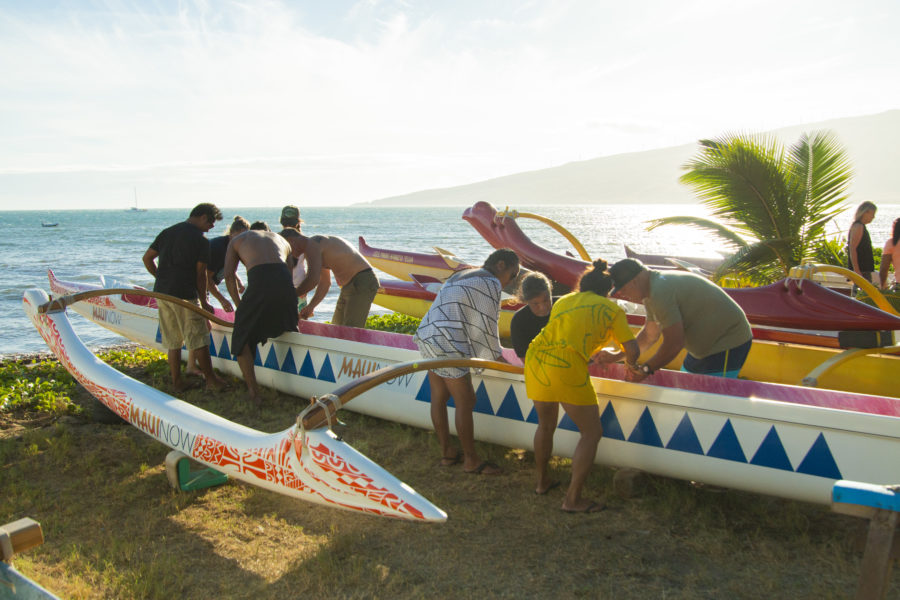 The Molokai Hoe and Paddle for Life

The Molokai Hoe was getting closer every week, I had trained hard despite having a slow season to storms and hurricanes. Through many hangups, it was becoming apparent that my crew may not be able to participate in the Molokai Hoe. Our strongest paddler Brent became injured, our steersman Keoki had career obligations and the list goes on. I was nearly in tears when it became apparent that I was not going have the opportunity to participate. As a member of the open men’s second crew, the first crew was very empathetic to our plight, and I am still very grateful for their mentorship throughout this year of paddling.

The next day, I heard about the Paddle for Life and, since I was sure the Molokai Hoe was no longer on the table, I mentioned to the other paddlers in my division that I was interested. Paddle for Life is a non-competitive paddle from Maui to Lanai and back. It’s roughly 18 miles each way.

It’s not a race… it’s a voyage, and all of our Maui Ohana are invited to join us for the event. You can get your own team together or join a crew. Experience the Hawaiian Culture through paddle, ceremony, chants and a BBQ on the beach at Manele Bay!

We had our fair share of setbacks toward getting to participate in Paddle for Life.

I was trying to rally my crew together. It was only a few days before the event. Getting them to participate would be difficult enough, but getting money out of them seemed much less likely. Participation usually came with a donation and an escort boat. When I approached each of them individually, I was met with hesitation. I had just about given up on the prospect before I received a message from Naim from Ozone.

Update on paddle for life.
1) we have an escort!
2) it’s a two day paddle, you will need overnight camping gear
3) ozone will pay the entry fee

I practically jumped out of my seat when I read the above message.

It felt like divine intervention. The most amazing part was that my team was named after paddling legend Patty Rycroft. 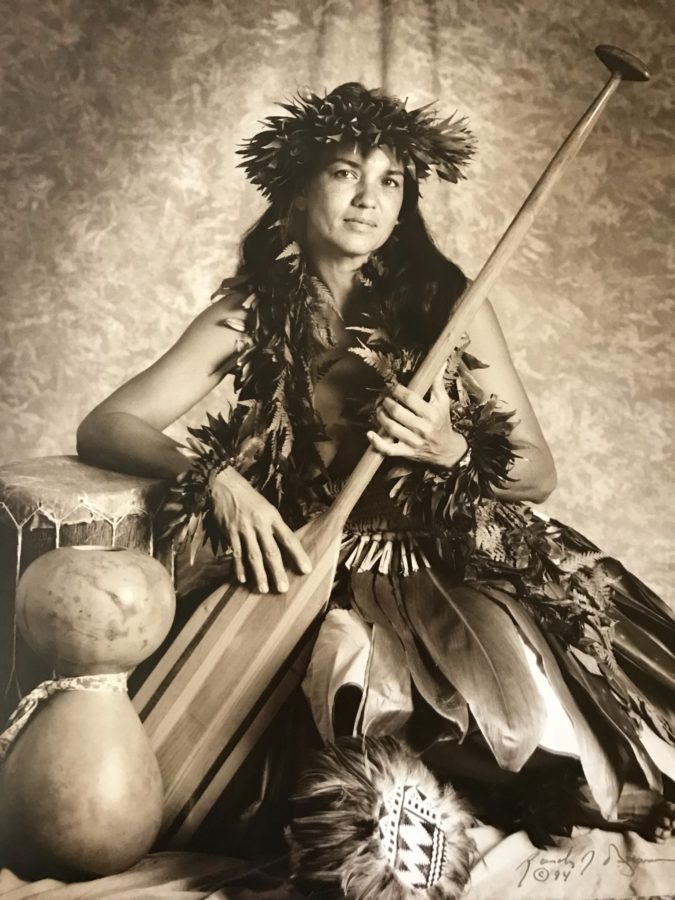 Patty Rycroft is a legendary waterwoman, held paramount regard throughout Maui and even the State of Hawaii.

My brother-in-law is her nephew so, in a sense, she had a family member in our crew. The Giblins regard Patty as family as well. They did name their team after her after all. Patty Rycroft led a beautiful life, inspiring all she met. I had spent her last Christmas with her at her sister’s home in California. I realize more every day just how blessed I was to have known her a little.

Since returning home to Hawaii and joining Maui’s paddling community, more people have told me how Patty Rycroft has changed their life than I can count. Her effect on those around her will never die. She has made me reevaluate my priorities in life. Soon after her passing, we paddled out to spread her ashes. I was hit by a revelation. The shoreline was filled with people who loved her. As I sat on my longboard with hundreds of others in Laniupoko, about a hundred or so yards from the shore, and was immersed in the community that loved her, I felt a sense of awe. The next day I began to reevaluate what I want to leave behind. The answer is fairly obvious, I want to maybe just have a fraction of the impact she has had, and that would be more than enough.

The Members of Team Patty

Of everyone in Hawaii Canoe Club’s Second Open Men’s Crew, only four were able to participate. Team Patty was coordinated by Wendy Giblin who was a good friend of Patty. Wendy recruited another family, her husband Michael Giblin and her two children: Michael and Keala. They had initially planned an additional family joining them, but for whatever reason, they had about four openings the day before the event. This was perfect for us open men because we had four men from our crew who were interested: Dan, Sparky, Darwin and myself (Joseph).

On a Saturday morning at 5:30 we met the other members of Team Patty and loaded up our escort boat.

Next, we headed to Canoe Beach. When first getting to the event, I observed that it was much friendlier than some of the competitive events I participated in previously. I had great conversations and laughs with the other paddlers. We started off with some introductions for each crew. People had come from all over the world to participate.

Hearing about their journeys and their battles with cancer really put things into perspective. All of my trivial problems seemed to fade away.

The first crew to start the crossing (From L to R) Darwin, Joseph, Wendy, Sparky, Kelly and Dan 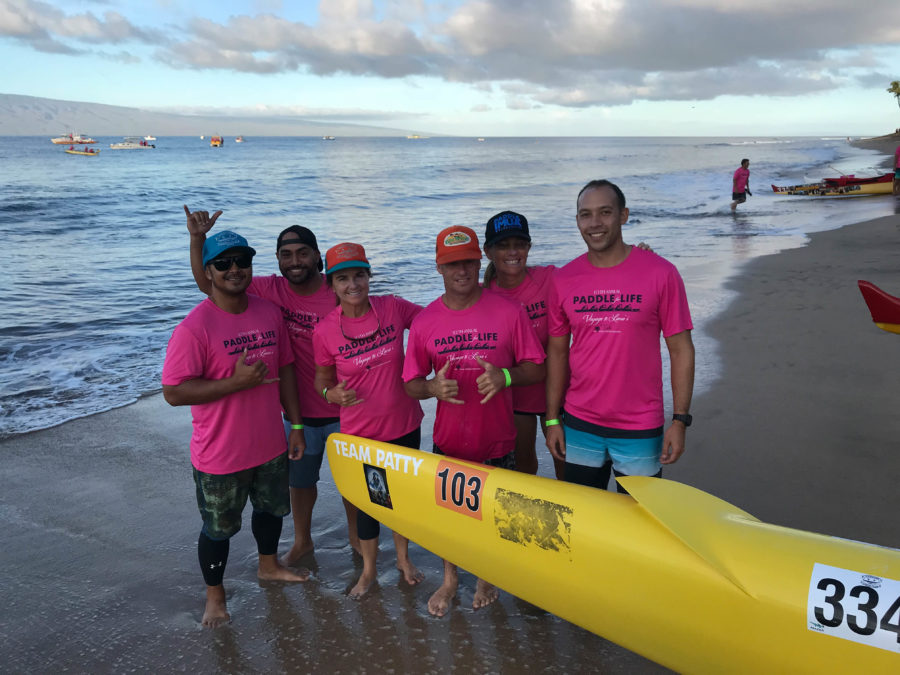 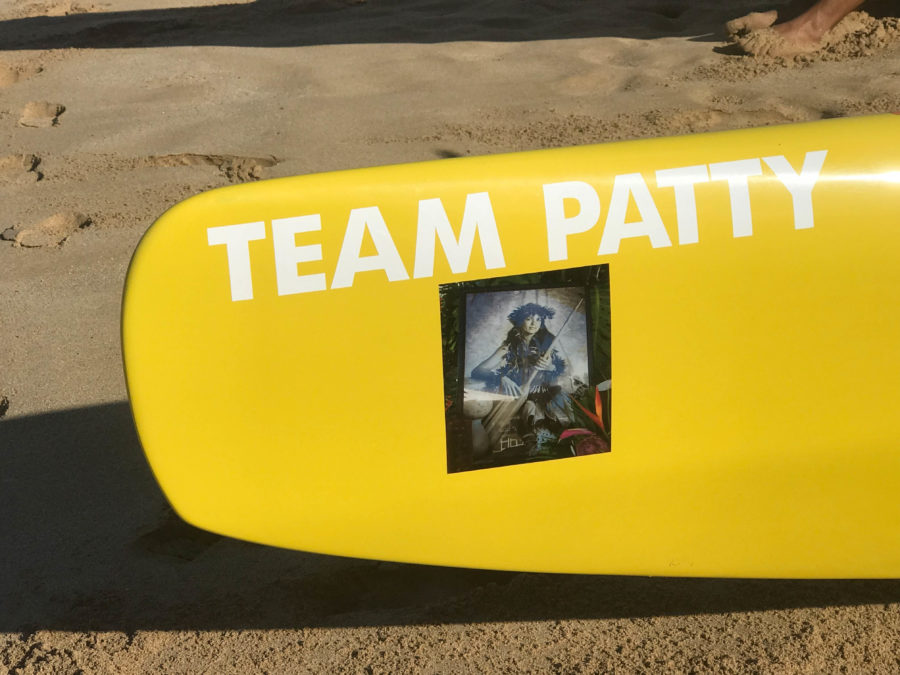 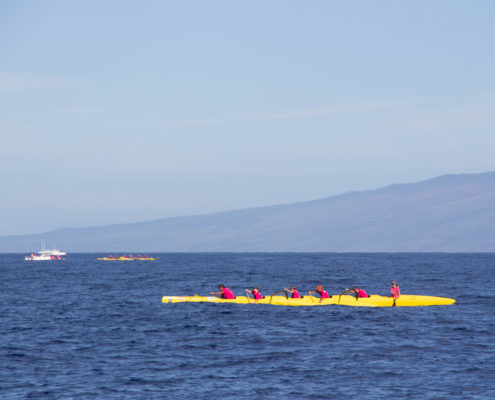 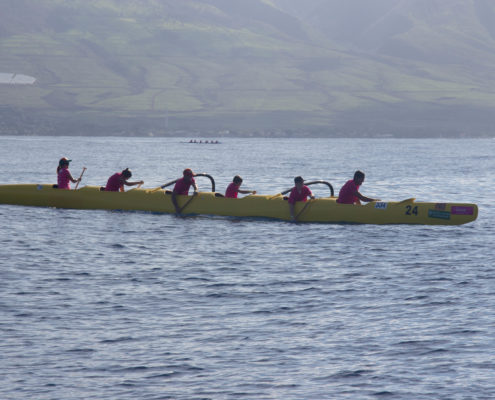 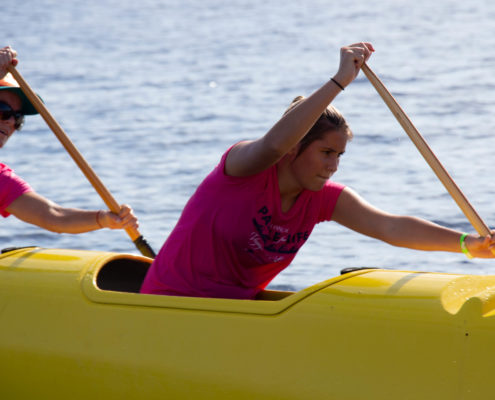 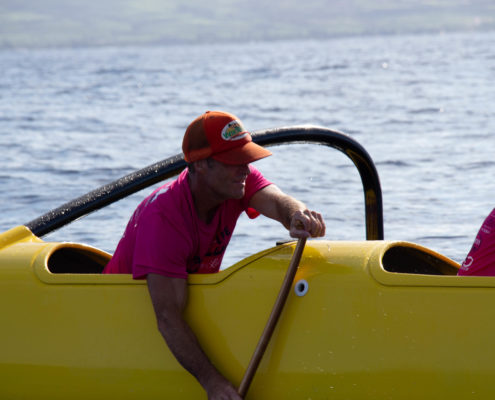 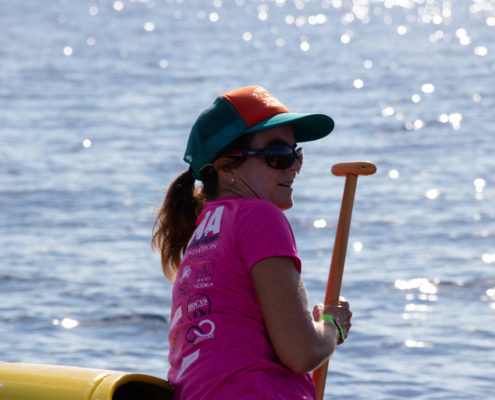 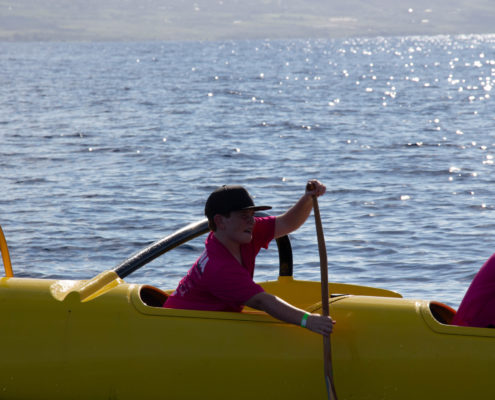 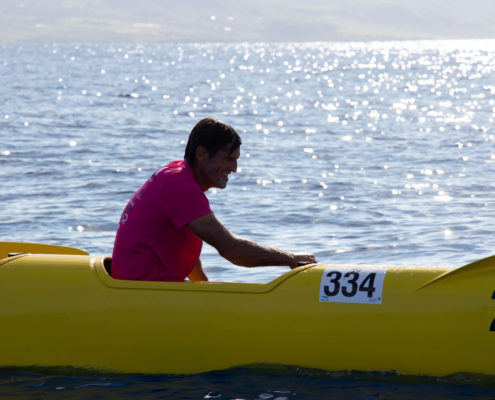 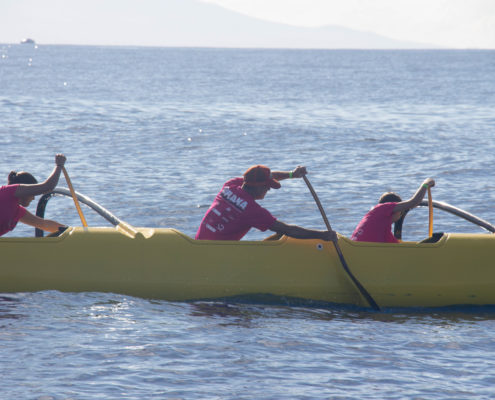 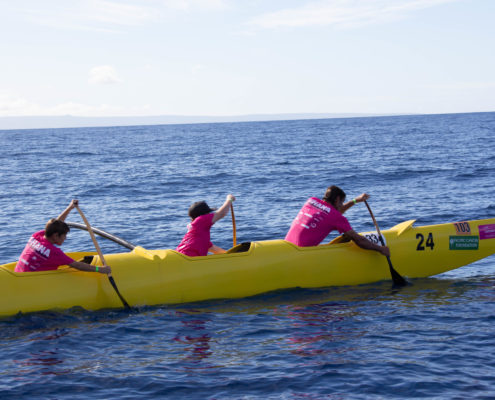 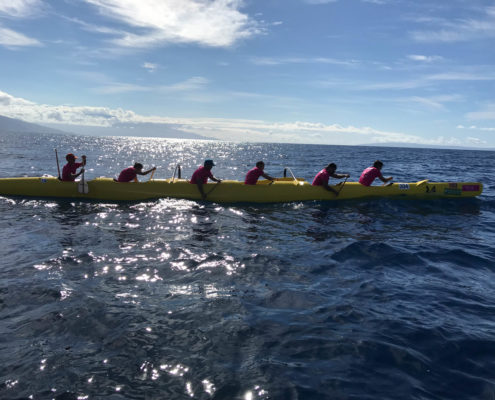 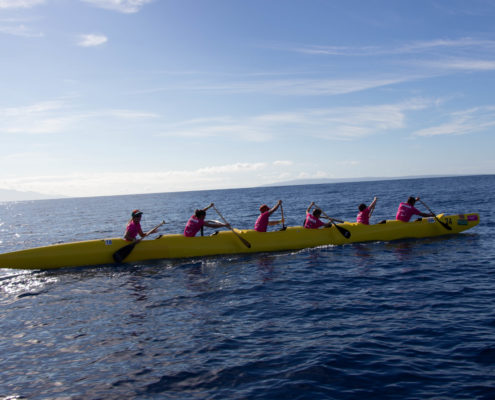 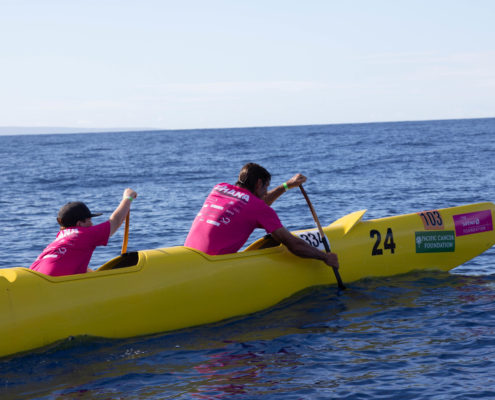 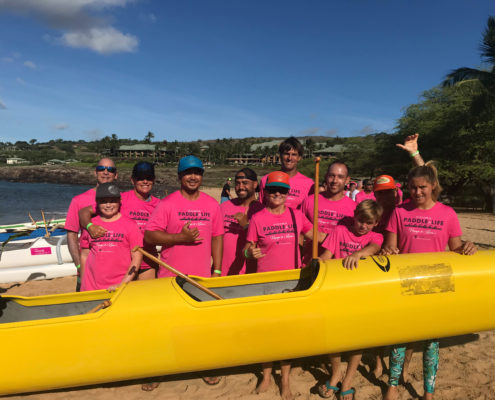 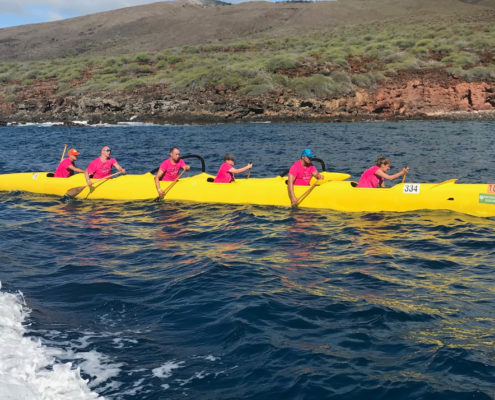 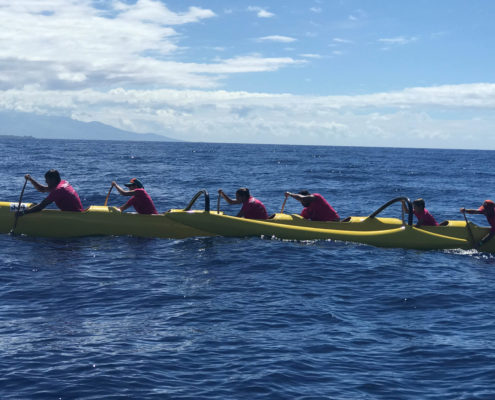 We paddled hard from the start and quickly shot to the front of the group.

There were two other crews in the front with us for most of the paddle; the other 40 or so crews were far behind. Those Ozone Canoes really do move. One of our steersmen, Sparky had some emotional moments during the paddle to Lanai as he reflected on the recent cancer-related death of his mother. We were the second boat to get into Manele bay, which is quite a boast when you consider we had three children and two adults who were new to paddling. The trip took us three hours and twenty minutes.

When we arrived, we were greeted by Lanai residents in traditional Hawaiian clothing and decor: loincloth and leis. They greeted every crew individually with a Hawaiian chant. We offered them some kalo that we had brought from Maui. This tradition of salutation has deep historical roots, possibly thousands of years old.

We set up camp and later went off to the main town in Lanai. The Giblin family gave random residents of lanai gifts: lollypops, books, and more. This showed our appreciation that the residents of Lanai allowed us to hold the event. It was pretty cool. Later that night we enjoyed a video about the first Paddle for Life event, which was followed by Maui’s legendary guitar duo: Hapa.

The next morning we all got together for a ceremony featuring a prayer. Then we were on our way back to Maui.

The paddle back to Maui from Lanai was faster: 2 hours and 35 minutes.

We were there before we knew it. This time we were the third boat to our destination. The kids in our crew were playing on the canoe outside the beach when as we paddled the last hundred yards to the beach. We carried our super light Ozone boat up to shore and went straight for lunch, which was already ready.

While we were eating, we were approached by Kaiulani and her children.
Kaiulani is Patty Rycroft’s Daughter and she wanted to thank us for honoring her mother in her own way. She felt so grateful it almost seemed unfair because we were already so grateful to be part of the event. She insisted on giving us gifts and leis. When I spoke to her, she told me that she was very glad that I was part of the crew, since I am her cousin’s brother in law. She thought it was neat that Patty had some distant family on the boat.

At the end of everything, I found myself feeling thankful that things didn’t work out with the Molokai Hoe for my crew. This was an incredible, once in a lifetime experience where stars aligned. I will always forever be grateful. Whatever trials life is throwing at you, get on a boat with your loved ones and paddle together, even if just metaphorically. 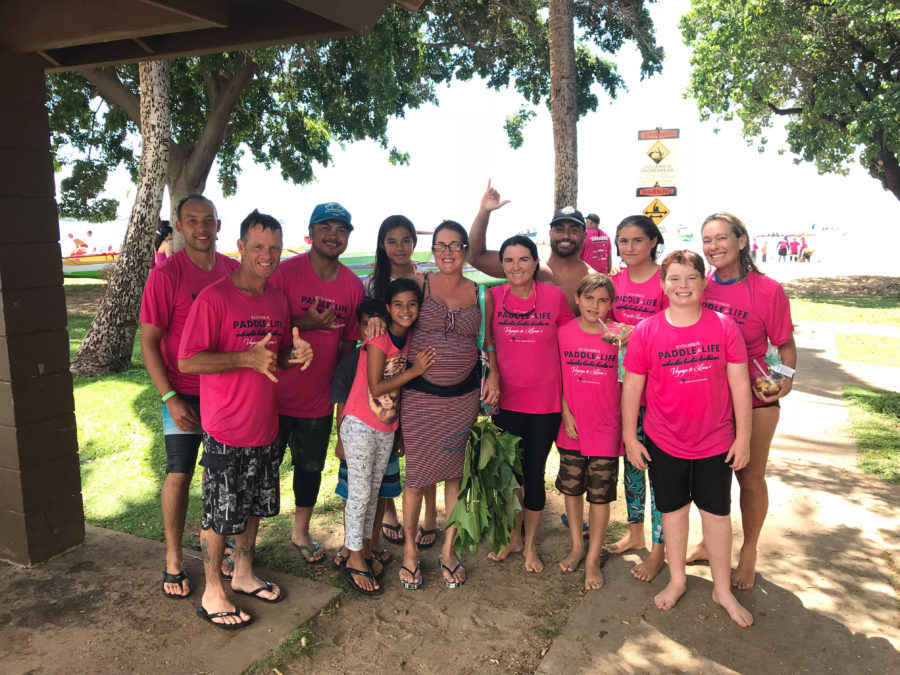 Editors Note:
Mahalo Joseph for sharing the story and for stepping up to be part of the journey and honor the memory of Patty Rycroft. Joseph is a Kanaka who paddles with Hawaiian Canoe Club and is a web developer on Maui. Big thank you to JB Guard for his help in providing the escort boat for the voyage, JB is another paddler who has lost someone close to cancer, Team Emalia was another paddling effort to honor Emalia, JB’s wife. A project has since been put together by Emalia’s mother, Brooke Brown. Learn about Na Keiki O Emalia and their mission to help children heal. I also want to mention Patty’s nephew, Bobby Bland. Bobby coached Hawaiian Canoe Club Men’s crew across Kaiwi Channel as Team Patty, in the canoe dedicated to her honor, Halikea. Check out Bobby on his website here:

Paddle For Life is a beautiful event that not only raises funds for the Pacific Cancer Foundation, but it brings paddlers together in an experience that extends our relationship with our paddling ohana, the ocean, culture and our loved ones who have past on.